Artists and musicians have ‘ruled the world’, pricked the conscience of nations, and influenced the fashion and lifestyle decisions of so many people. They are seen as demigods and worshipped as idols. So a great music website design should include information that will bring that artist closer to their fans. Making them feel like they know them personally should include lots and lots of photos of the artist or musician. Their biography, tour dates and where the band or artist will be playing, is also useful information for true fans. Stores and outlets where the albums can be found, and also where to download the music is a must. A really nice thing to add to the website is a song sample or a sample video clip of a soon to be launched song. And don’t forget to include a catchy phrase and killer graphics to draw the visitor to the site. 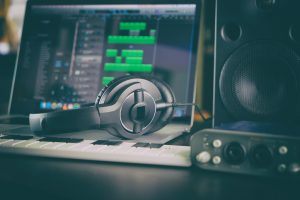 The Surge In Music Streaming

When you think of how technology has changed our lives, this can be applied specifically to music too. There was a time when we had to buy a cassette or Vinyl record and could make a request at a favourite radio station so the Dj could play our song. The emergence of mobile devices changed many things in music and how we listen to it. There has been a surge in music streaming via digital services and subscriptions. However, there has been a change in lifestyle yet again! According to a report in 2017, there is now a Vinyl Revolution. 4.1 million Vinyl albums were sold, representing the highest recorded number, since 1991. Turntables have once again become a must-have and trendy gadget. Music enthusiasts both young and old, who love the authentic sound of Vinyl records, were responsible for reviving this beautiful music relic. Despite that surge, music sales still soared by 10% in the UK to £1.2 billion in that same year. The entertainment market in the UK is now estimated at a whopping total value of £7.2 billion.

Making your own authentic sound, with baselines that get people up on their feet, is not that difficult. When looking to find beat making software online, the choices are numerous and can be confusing for a first-timer. So what should you look for or consider before purchasing? Pricing is a real factor for any startup studio or sole producer, but software can be inexpensive for a very basic set up. Which computer are you using to do your music mixes? Some software may not be compatible with Windows and will only run on a Mac. What kind of music or sound do you want to produce? There is software that will allow you to upload your finished songs directly to the Cloud, Soundcloud, Facebook or Youtube. The one thing that many of these software packages promise is freedom for the user. With pre-made loops, you can arrange, mix, master and produce your own music from your home studio, with professional level recordings and quality.